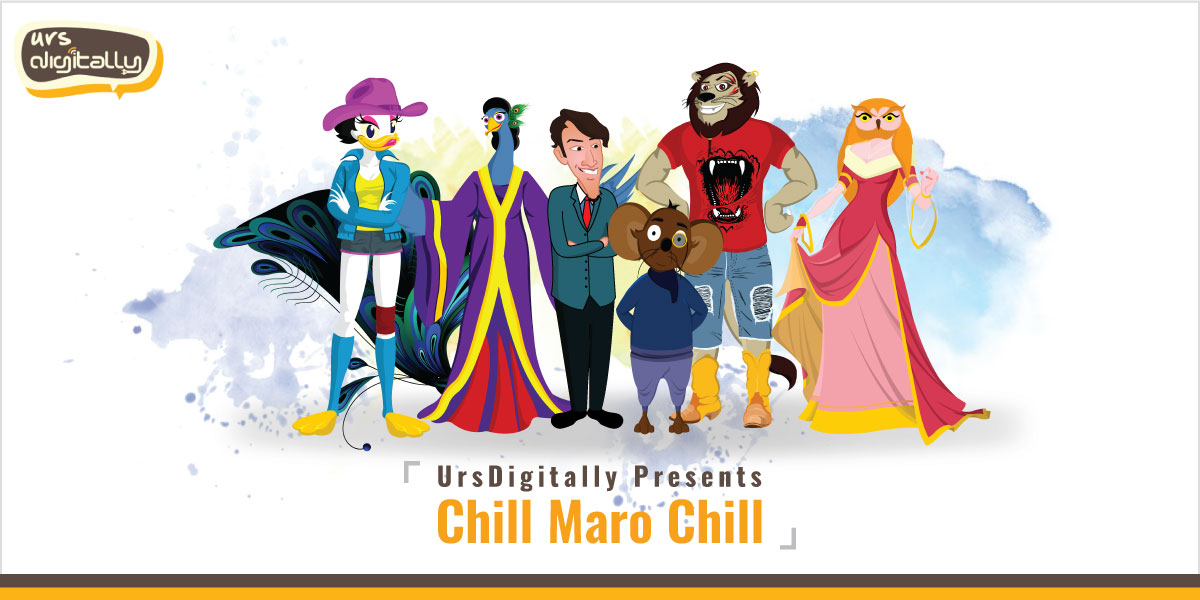 Our Side Project – A Comedy Spoof series on Bollywood, Politics, and Current affairs | UrsDigitally

Creativity sure knows some eerie ways of expressing itself. Whether you are dreaming your fantasies on an afternoon nap, taking a small work break for a ‘serene’ and long desired puff, or having a dinner date with your crush, god knows when ideas will pour in.

And when such a moment comes, the creative fanatics we are at UrsDigitally, we make sure we squeeze time off from the usual hard work and deliver something ‘different’.

It’s a way to conjure up some really different and memorable moments, to relax our own minds, and above all, steal some precious, humane seconds of ‘heart-out laughs’ from the daily robotic lives of our viewers.

A comedy spoof on the popular Bollywood film – Padmavat

Few weeks prior, one such idea suddenly dawned in one of our video editor’s minds while he was planning an film outing with his friends. Soon, the video production team gathered on the conference room and started having a brainstorming session on the idea.

Some were sceptical, more because of the wide controversies generated by our last religious spoof on the lives of Shiva-Durga, though the video had become instantly viral on social media.

The other half however was convinced on the promise the new idea held and eventually, after a prolonged tug-of-war between different viewpoints and perspectives, everyone gave a thumbs up and the side project was kick started. Over the next three to four days, a lot of visualization, fine tuning of ideas, and content editing, bought out of the free times from regular brand work culminated into the short, exciting, and funny video presented here.

The idea: Managing in-outs and the stars of billions of lives is sure a hectic task and no wonder gods have very little time to spare. But, we just ignore the plight of the vahanas or the divine pets that accompany the gods at every task and have just the same hectic lives. Well, one fine evening, the vahanas suddenly encountered some free time and they sat together to plan an ideal outing in Earth. What unfolds next is a thing to surely watch for.

Animated Comedy Video on Santa and his trip to Kolkata

Just another couple of months back, We produced another comedy spoof – a small satire on random dwellings by the Kolkatans. The plot features the loving Santa as he lands in Kolkata, and decides to take a trip to Park Street – in a metro!!

Travelling by metro in Kolkata is an experience of its kind. It is no secret the city is already filled with Ola and Uber cabs, yet the humble Santa decides to commute like a common man. Additionally, Santa is all dressed in Blue attire that symbolizes the recent transformation of administrative power. And how the majority of the city’s Red monuments are re-painted Blue. Well, it was hilarious yet sensitive how the spoof also came up with the idea of showing the increase in the cases of IPC 498!

We also focused on how a well-known restaurant in Park Street area treated an ‘ill-dressed’ customer. It’s gloomy how our city has changed over time. The busy Park Street witnesses a lot, from unfortunate kids selling balloons on the street to affluent couple cherishing the yuletide.

From voice-over to video editing, what a fun-filled 3 days of home production it was. As we truly believe, “The magic sauce is the power of experimenting with new ideas.” I am happy that the team keeps coming up with such fun pieces time to time.

When your team is a full of uber creative young bunch of free souls, a non-stop flow of creative juice is bound to flow around, and you can expect some fun projects popping out time to time. We love to ideate on side projects beyond the realms of client works, and try a little-out-of-the-box experimentation with our own branding. There is a lot of fun in this. From ideation to storytelling, writing dialogues, conducting internal auditions, recordings, and what NOT!