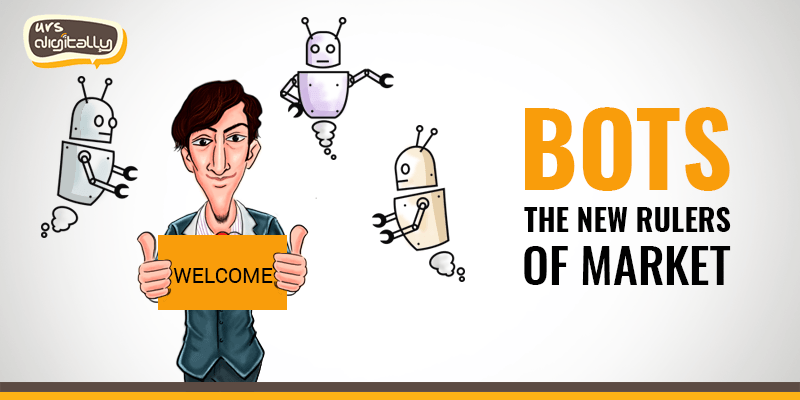 Recently I came across a jokebot on twitter that made me go LOL. The bot responds to your request for jokes and sends one. Though most of them were known ones, I kind of enjoyed the interactions. Enthused with the success of playing with a bot, I tried Google’s ALO which also offers an AI driven interface where you can demand almost anything from the bot – joke, facts, trvia, weather and what not. Since then I got addicted to it and spend at least 15-20 minutes every day playing with it.

The first Chatbot was introduced 50 years back! Yes! Don’t freak out, better late than never!

Artificial Intelligence has come into presence since years; science fiction introduced us to robots ages back. It has been more futuristic than realistic. However, the new age technology is bridging the gap between science and execution through the application of Bots.

But, how could these bots be of any help to digital marketing companies like us?

Once upon a time, in a booming metropolis of America, there lived a very talented software engineer, Josh. Josh had been a very promising student at the university and a favorite of his tutors. But, fate marked him as a failure at professional arena. Seniors tagged him as ‘good for nothing’ and colleagues made fun of him. He switched his job again and again, but only to settle nowhere.

One day he was sitting at home, idle, frustrated. Tele marketers were ringing him repeatedly, adding up to his irritation. Then suddenly, Eureka! ‘Why not do something to get rid of these cribbing tele-callers!’ And history was created! He gave shape to bots that went to war with the abusive and annoying tele-callers by wasting their time with AI driven responses. By the time the tele-callers realized what they were dealing with, they were too exhausted to fight back, and eventually gave up. The calls were drastically reduced, and Josh vowed to continue the war with the tele marketing folks! He now run a hugely profitable company with an army of bots providing services for man and corporate kind alike

BOT Will Help Marketers – Not Eliminate Them

Expert predictions are totally in favor of these bots. In fact, it’s been forecasted that 2017 is going to be the year of Bots.

But contrary to the popular beliefs, bots will not replace marketers but help them in finding better insights lying deeply buried under data from your campaigns.

They will understand customers’ intent better to serve them with first level responses, or improve funnel optimization for PPC campaigns.

They will be able to forecast the campaign performances for specific attributes basis archival data points.

They are going to recommend highly contextual content by analyzing your browsing habits, search queries, and social behaviors.

Be it super effective SEO, customer response management, or content recommendation, the bots will be widely used in digital marketing within a few years.

Being a digital agency we are so much in love with technology, and have started implementing bots in some of our projects. Our team recently worked on Chatbots for a reputed client. It’s basically a computer program that creates engagement with a human user. So, if you’ve been recently wandering on some dating sites, make sure you’re not love-trapped with a chatbot disguised as a lovable person!

The social media giant Facebook has declared to integrate Chatbots in their messenger and business pages. Business domains like E-commerce, hospitality, real estate, all are tying knots with Chatbots for lead generation. Undoubtedly, the Bots are riding high these days, promising your business that the sky is the limit.