Who is your first love in life? To some, it’s cars. And when cars are linked with heritage and mystery – it gets a name – Huntage. The heritage car rally Huntage had its 6th season recently. The event was partnered by our digital media house, UrsDigitally. This exceptional car rally event was conceptualized and organized by Voiceworx and has some prominent name as sponsors including Servo Indian Oil, The Telegraph, Eco vista. 91.9 Friends FM was its radio partner. The heritage car rally took place on 26th March, 2017.

About Huntage – The Heritage Hunt

Car rallies are quite common, aren’t they? Then what way Huntage was special? Remember those old-school game shows where participants had to make their way to the victory stand by unraveling mysteries and puzzles at every step. Well, Huntage – The Heritage Hunt offered its participants a set of clues – 6 heritage spots of Kolkata where they needed to reach driving their car. The sooner you resolve the mysteries, the faster you reach the spots and finish the rally. One who does it quickest, wins the game.

The event started early in the morning, the cars were reaching Ecospace, Business Park, Rajarhat, 7:30am onwards. The team started stickering the participant cars by 8, and why not? Fresh breakfast was waiting. After gulping smoking hot tea and tasty biscuits, all headed for the Captains Meet session. The session took around 15 minutes, explaining all the rules and regulations of the rally. Finally, it was time for flag off, this went on since 9:15 – 9:45am. 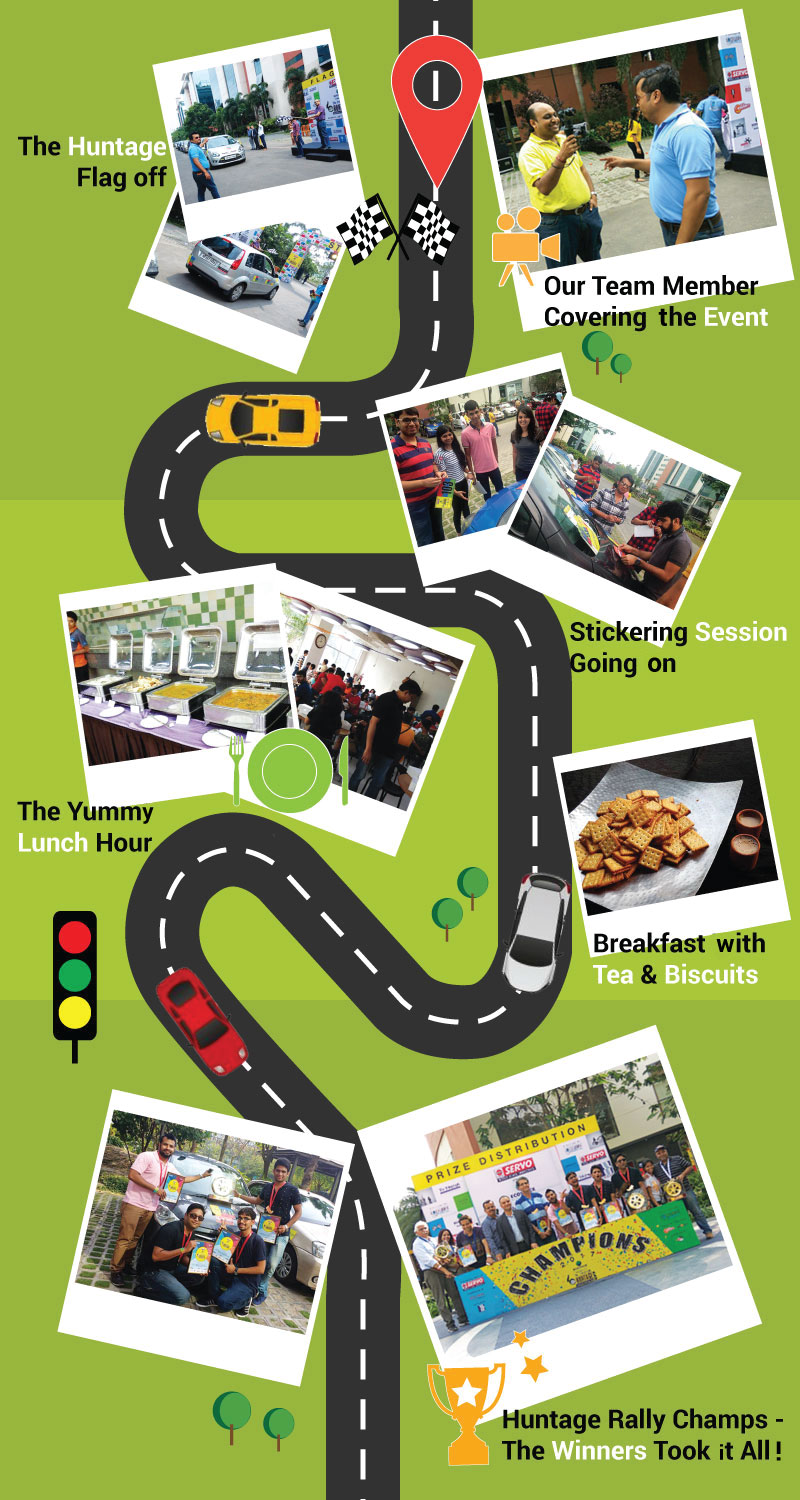 Flag Off by Industry Stalwarts

We won’t be exaggerating to mention that Huntage had some of the sharpest minds of the industry present at the venue. The flag off by Abhijit Banerjee, Club Head, Ecovista, Abhijit Sen Roy – State Retail Sales Head, Lubes, Indian Oil Corporation, made the season 6 unforgettable. Personalities like, Vineet Kaul, Senior Manager, Branding, Indian Oil Corporation, Arup Ratan Roy, The Telegraph, ABP expressed their views about this unique car rally in Kolkata.

The Huntage media promotions were so effective, it received 140 registrations. On the D-Day, our team members who were present at the event to cover it, witnessed 300-500 participants. Friends, families, colleagues, old buddies – Huntage became a grand gathering spot on the sunny Sunday. Huntage offered its participants complimentary breakfast and lunch. People were all smiles, spirited and in the mood for road battle. They didn’t mind to share their thoughts, feelings about the rally with our members. Adults, children – all were clearly enthusiastic about the Sunday fun event.

We – the Online Marketing Partner of Huntage

The enthusiasm was viral and it didn’t spare our UrsDigitally team as well. Our representatives were proud to see all our hard work turning out to be a success! As the online media partner of Huntage we conducted around 20 days of promotion prior to the event. We produced a lot of engaging posts on Facebook inviting people to take part in it. Our motive being maximum traffic generation on the Huntage web portal, the UD team highlighted the core USP-s of the rally. Our creative carried the mystery factor of the heritage hunt rally – a competition driven by clues. Also, we posted several GIF-s and short video clips featuring the heritage perspective of the City of Joy. We ended up delivering 539 leads to our client, Huntage.

While covering the event, our team members posted a number of Live videos, sharing the combat heat with the online followers of Huntage.

Kolkatans are smart! The winning team made it by visiting all the heritage touch points by 12:15 in the noon. Pretty fast, huh! After the cars were back to Ecospace, it was lunch time for all. If you’re thinking the event ended that way, then you’re wrong. A rapid quiz contest and an amusing magic show by Tapabrata Chakraborty made the Sunday afternoon of all participants.

By the time the stage was set for prize distribution. The Invincible team of four energetic young lads was declared to be the winners. Huntage – The Heritage Hunt finished its 6th journey with prizes galore, including trophies and certificates. It was a lovely day indeed, all for the car-love!