Within The first minute of you reading this blog, about 255 babies would be born, 96 million e-mails sent, 3 km of forests cleared for urban development and 255 more babies would be on its way in the next minute. To put things into perspective, the world population increases by about 500 people in the time that you make that bowl of Maggi.

Well, that stat was meant to give you a little jolt, which anyway was un-necessary, we must admit. Every morning, while riding the metro-rail, you feel the uncanny pressure of population over every inch of the body. No? But, WTF? Does anybody really care about World Population Day? Yes We do. Our crazy creative team does. Over a lot of coffee and puffs down the corridor, a stream of maddening ideas came flowing for this year’s World Population Day theme. As you read along, you will get to know how to create strong engagement with your audience on social media with powerful social messages.

Touching upon extremely serious topics like “a covered banana” or the funnily intense “spacious shoe rack”, here is a peek-a-boo into some of the ads we designed this year for the World Population Day campaign on social media for brands ranging from footwear to hotel. Each of the media creative was developed in context with the brand personality, nature of business, and relevant social messaging. (Check out our recent campaign on Father’s day) 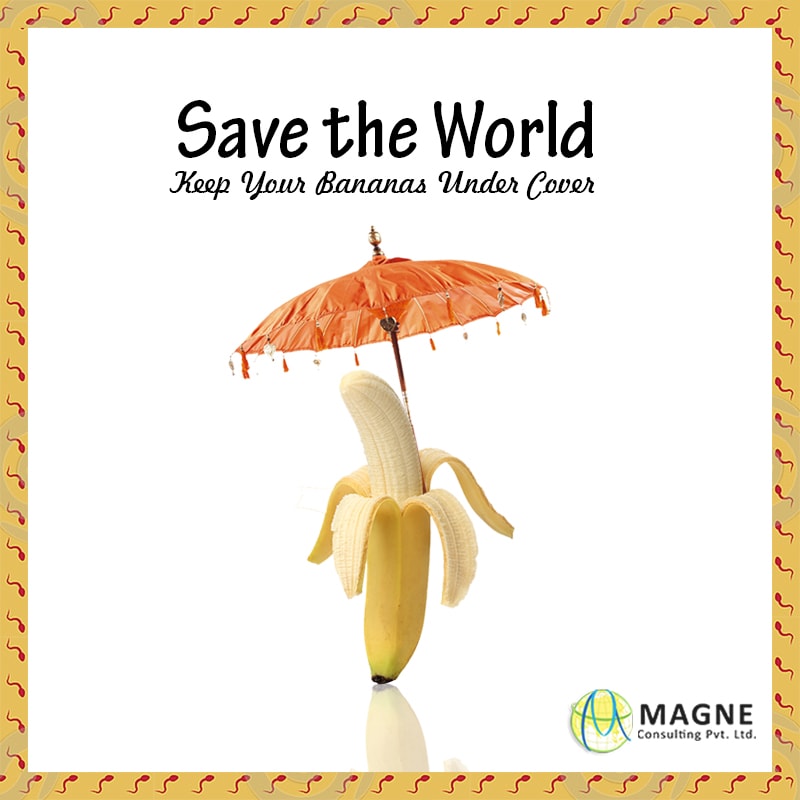 Let us start with the most “easy to grasp” creative designed by us for this World Population Day 2016 activities. Ideated for and by Magne, this ad talks about the most common cause of overpopulation especially in underdeveloped and developing nations; unprotected sex. Although there has been quite some effort in spreading awareness about the problems of unprotected sex and its contribution towards rising cases of STD’s, the fact that it has been one of the most influential causes of population explosion is still not prevalent in popular thought in most developing and underdeveloped nations. We thought of taking the issue ‘out of the fly’ and swerve away, the inhibition surrounding the matter. 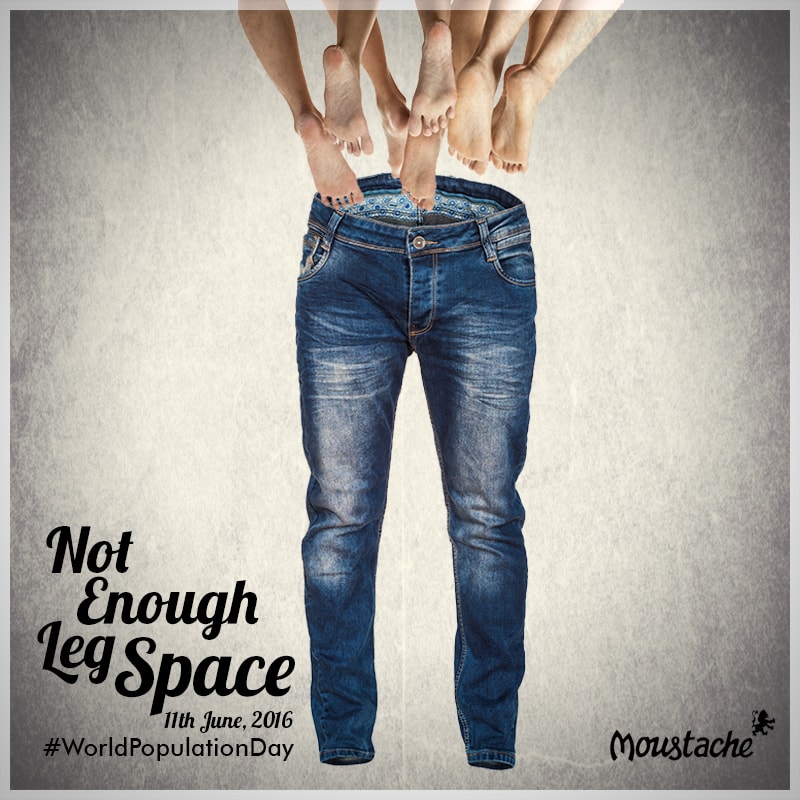 Designed for the iconic Jeans brand in East India, we have hit upon one of the most apparent effects of population explosion. The lack of enough resources and the lack of habitable space are increasing sporadically daily. With an aspiration to hint towards sustainability, this starts of on an odd footing and places its foot firm on the ground, even as there is “not enough leg space”.

We Just Have Too Many People 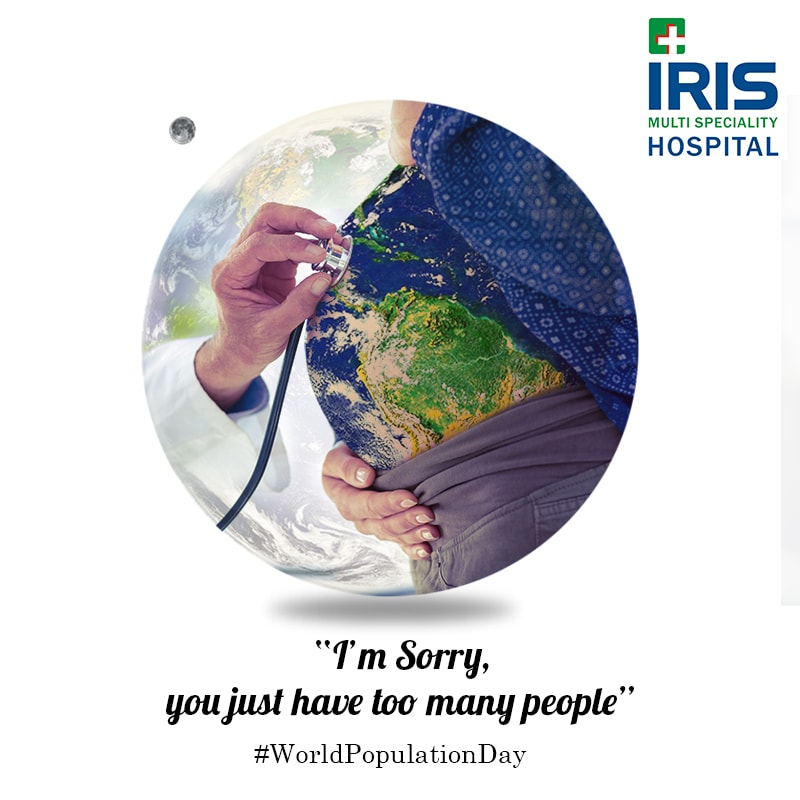 Developed for a leading brand in healthcare, this World Population Day ad brings into focus the discomfort and illness affecting Earth, due to the strain caused by overpopulation and its exploits. With around 7.4 billion people living worldwide, and research predicting a 11.3 billion population by the turn of this century, it’s about time we started thinking about sustainability, to ensure that the Earth is healthy enough for the generations to come. Incidentally, we chose to highlight the pregnancy in order to maintain sync with our ongoing MAA campaign for the brand.

The only Solitude is the one you find for yourself! 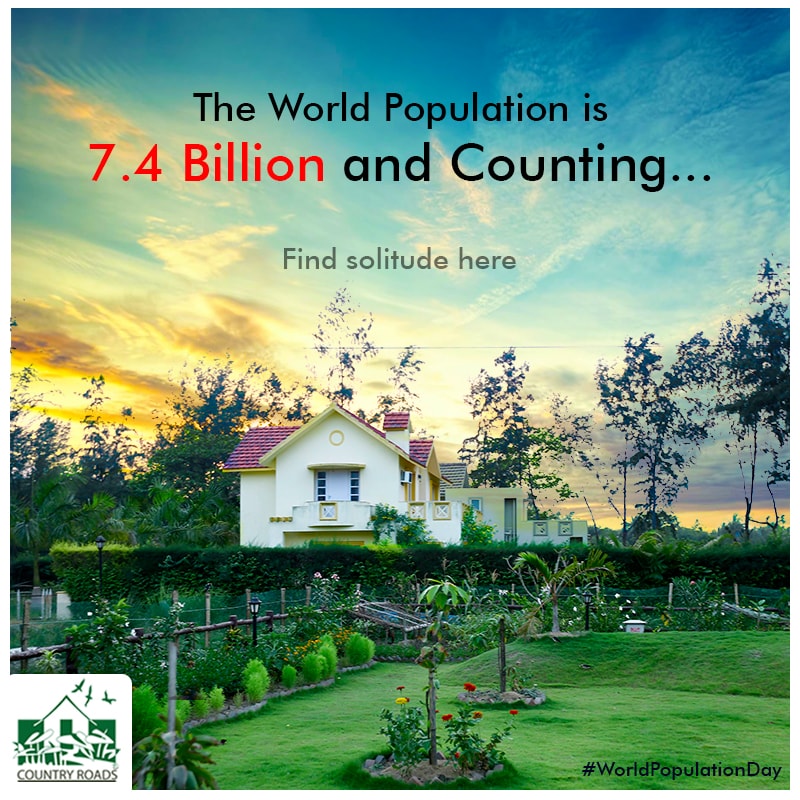 Country Roads is a premium resort situated a stone’s throw away from Calcutta. For their World Population Day campaign, we decided to keep it simple. All we did was mention the net population of the world today, and also proceeded to a call to action about “finding solitude here”. While on first impression it seems to be a call to action to the resort, on hindsight, the copy seeks to ask the reader to start contributing to a better world by finding order in this chaos of a world burdened by overpopulation.

Remember the picture book questions from kindergarten? The ones in where you had to identify objects given in a picture? Well we sourced our inspiration for our next World population day ad from that. Designed for an online jewellery brand, this ad simply takes a page from a little kid’s life. It Seeks to parlay two really precious things. A gold necklace and a “world space-less”. With per capita population increasing almost two folds in the past decade alone, if we do not have a better plan to tackle population density, we might end up with a lot more than we can handle.

No Place to Play! 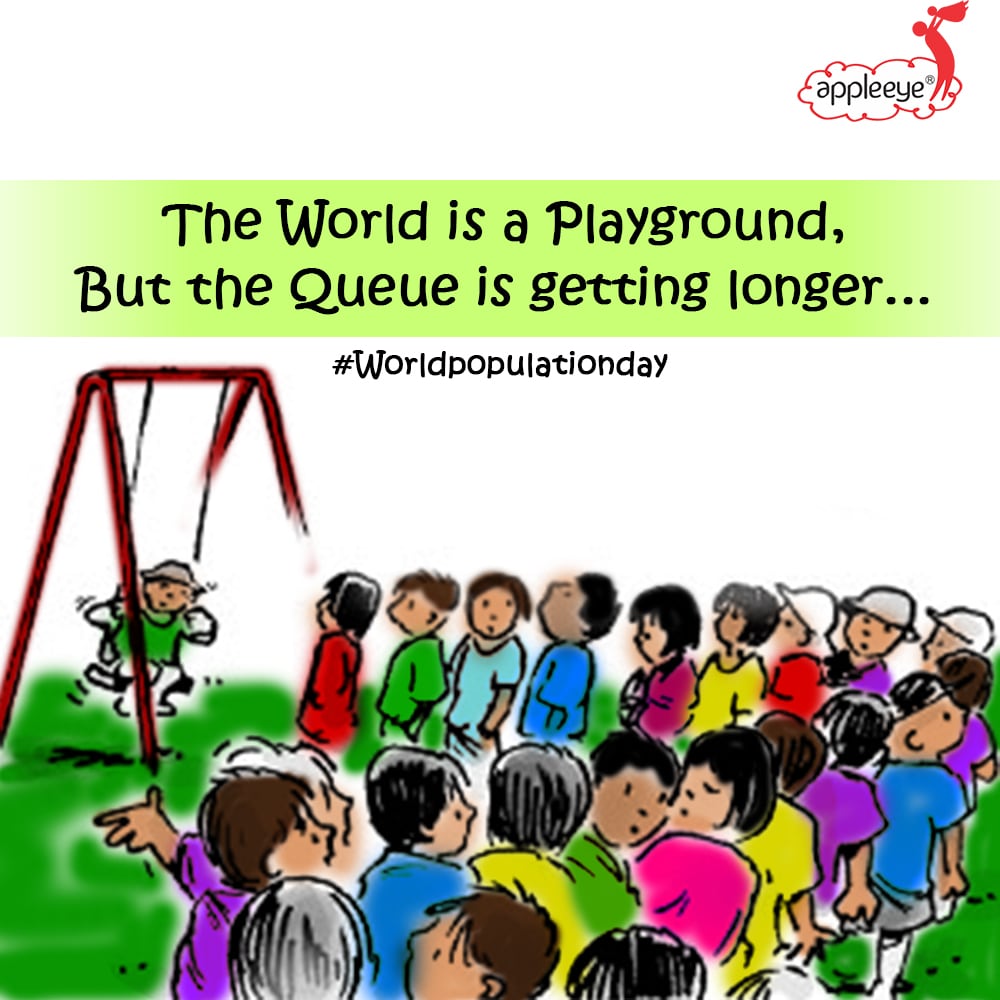 For a kids wear brand, AppleEye, we sought to bring focus to the effects of population explosion. With quickly depleting natural resources and lack of equal opportunity arising from the gap in population growth and resource generation, we can easily say that it is almost like a Sunday evening at the neighbourhood children’s park. Well too many kids, but only a single slide. It is about time we thought objectively about the conditions of the present and how it can be bettered for the generations to come, this Word Population Day. 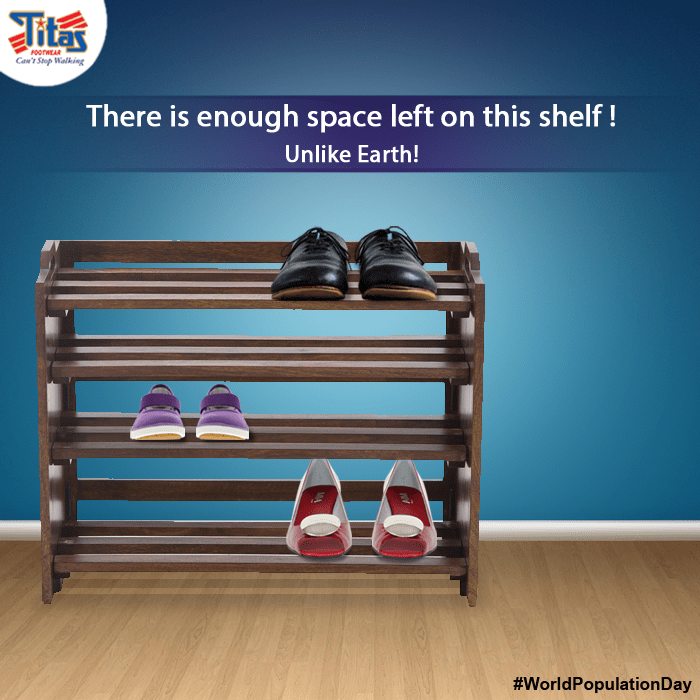 This World Population Day ad for Titas, a leading footwear brand, simply carries forward the idea of the increasing population density in cities and the imbalance caused in resource dispersion because of it. Well the shoe rack does still have space, but the world is quickly running out of it. It’s time to think and act fast! 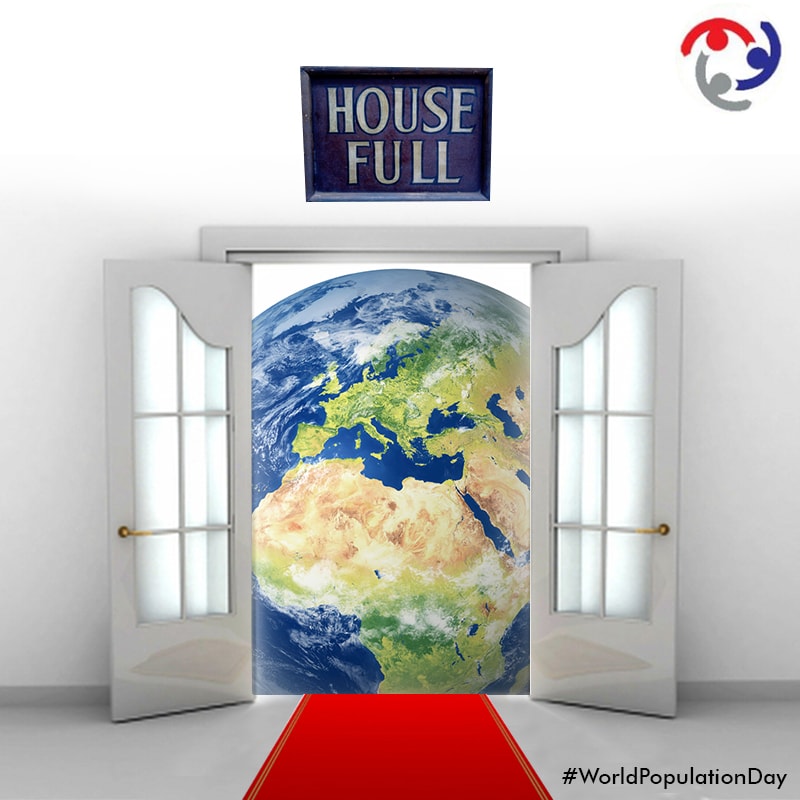 No. This has nothing to do with Sajid Khan and his audacious series. Designed for a business centre brand, the address for some of the biggest brands and businesses, this ad for their World Population Day campaign is inspired from Cinema. Let’s face it. We have all been to the cinema at some point or the other, only to find a “house full” board hanging at the gates to greet us with disappointment. Let this not be the case with the future generations. The earth is already finding it difficult to sustain its population. At this rate, maybe soon it will hang up its own house full board to humanity if we do not start acting now.

Many bricks in the Wall! 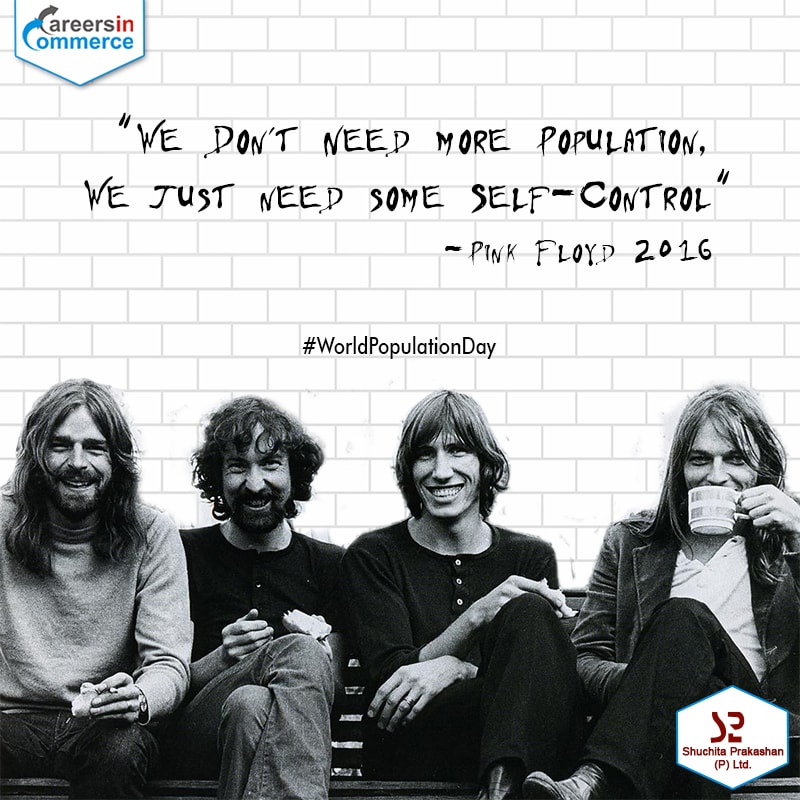 There are not many people who have not heard Pink Floyd’s great hit ‘Another Brick in the wall’ All we had to do for Careers in commerce, is bash the wall down at one go to create impact. Well by tweaking the words of the song a little bit, we could communicate the issue of population explosion and also end it on a lighter note by asking people to practice a little bit of self-control. Basically one of the reasons resources are scarce is because of unmindful consumption. Unprotected sex is the single largest cause of population explosion especially in developing nations. In both cases, a little bit of self-control and awareness will help. 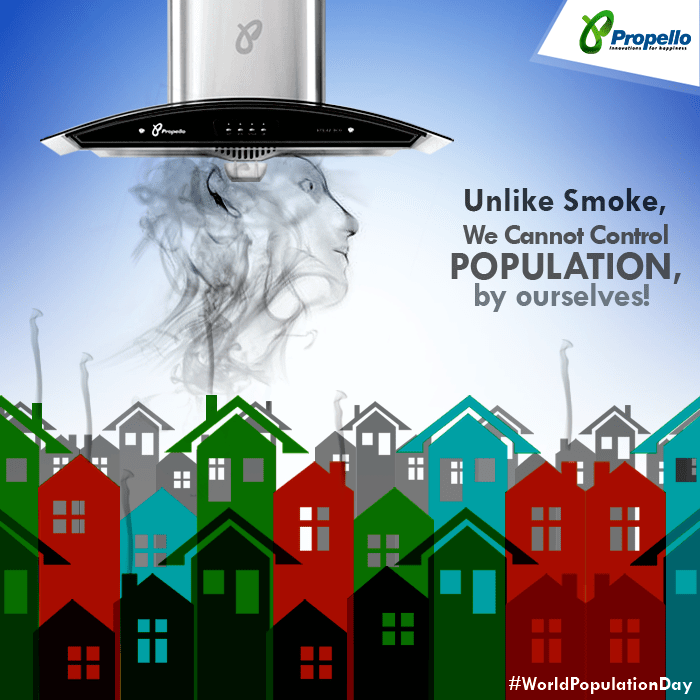 Propello is brand dealing with innovative and technologically advance kitchen appliances like kitchen chimneys etc. The World Population Day campaign we designed for them sets the record straight. It is not a single persons task to combat population explosion. Only with proper awareness and unified approach towards sustainable measures can we combat the adverse effects of an overpopulated world. 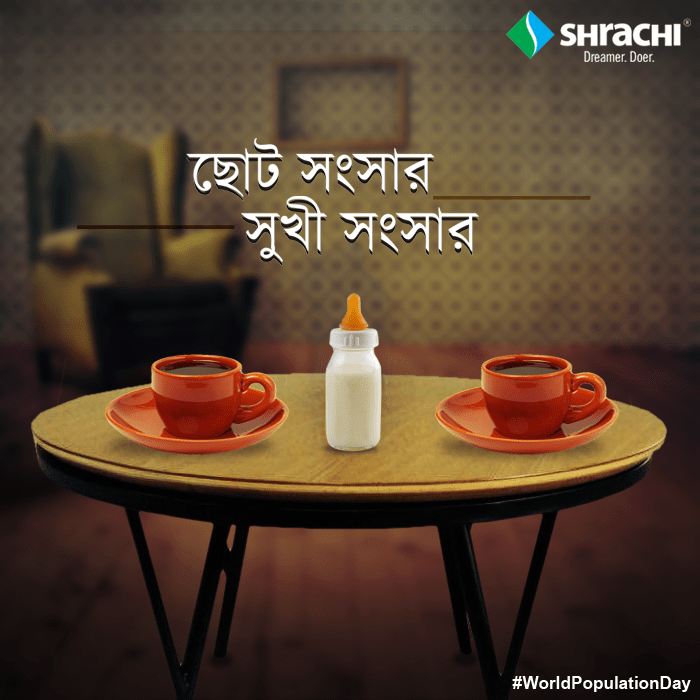 For Shrachi’s World Population Day we furthered a much talked about topic regarding family planning. The past few years Southeast Asian governments have been promoting the idea of a nuclear family to combat the problem of high population density. For this real estate brand, we took a seed from this idea and looked to establish the concept of family planning, a well-established global campaign aimed as a sustainable approach in family planning.

If you like this article, please do share it wide and far. You could also visit our creative showcase to check out some of our recent work.