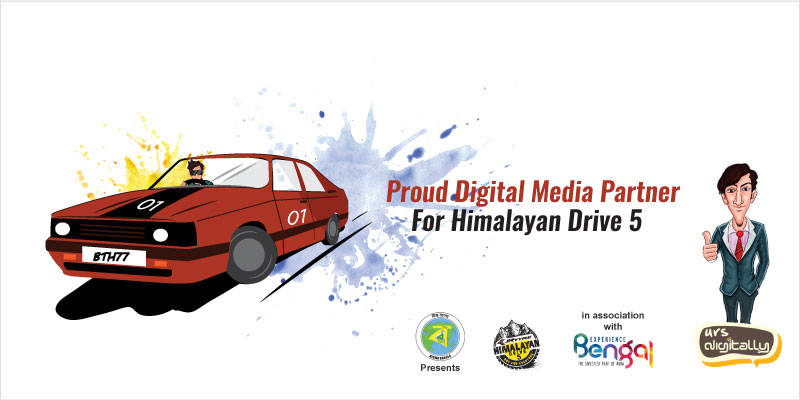 Enough of your pc and mobile gaming. It’s time you catch up some live action, get some real sweat and dust. Theseason5 of the JK Tyre Himalayan Drive, presented by Biswa Bangla &organized by Just Sportz in association with Department of Tourism, Government of West Bengal is the only Time-Speed- Distance Rally of its kind in India. UrsDigitally has been its proud online partner and was responsible for creating the rally-reach at the farthest corners of the world.

This year, the JK Tyre Himalayan Drive 5 was a tri-nation affair involving Nepal & Bhutan. It was ceremoniously flagged off by the Commissioner of Police, Siliguri, C. S Lepcha in presence of all the stakeholders of the event from Siliguri City Centre, on 25th of February. Zooming through the North Bengal’s lush greenery, Bhutan’s mountainous roads and picturesque locations of Nepal, the main motto of this rally was to promote motorsport & showcasing the immense tourism potential of North Bengal.

Traversing through hilly regions of Darjeeling, forests of Dooars, Paro, Dochula Pass, Thimpu in Bhutan & Hile in Nepal for more than 1250 km over 5 breathtaking days, the rally was a grand success with more than 100 participants and 48 cars competing for the title. The prize money was a sum of 6 digits. But the most exceptional facts about this season were –

Representatives of team UrsDigitally were present throughout the event and covered the entire rally.On the D-Day the top rallyists of the country traveled off through lush forests of North Bengal that are home to a rich array of flora & fauna including the one horned Rhino &the Asiatic Elephant.The drive to Dochula was an easy one through good mountain roads that winded through breathtaking & stunning landscapes.

The most amazing incident in this chapter was the extremely smooth checking procedure, while entering in India from Nepal. Usually, it takes several minutes. However, due to the well-spread name of the Himalayan Drive, all the cars were allowed to pass on with active cooperation from the border personnel. The prize giving ceremony at Siliguri City Centre was a gorgeous one. Indian Idol fame Abhishek performed some of the popular Bollywood numbers for the entire gathering. The event was followed by a dazzling dinner at Montana Enclave.

In the past 4 years, this amazing car rally occurred without creating much buzz online. Along with hefty sponsors this season our client wanted to build an impactful digital presence, so that the event becomes more popular and draws copious participations.

Just Sportz aimed at connecting countries across boundary and our digital marketing effort turned out to be a grand success!

The JK Tyre Himalayan Drive is one of the most renowned and unique rallies of its kind, that is why it got an extensive media coverage from the esteemed media houses like The Economic Times, The Times of India, Business Standard, The Hindu to name a few.The event has also been featured in Yahoo! News, India