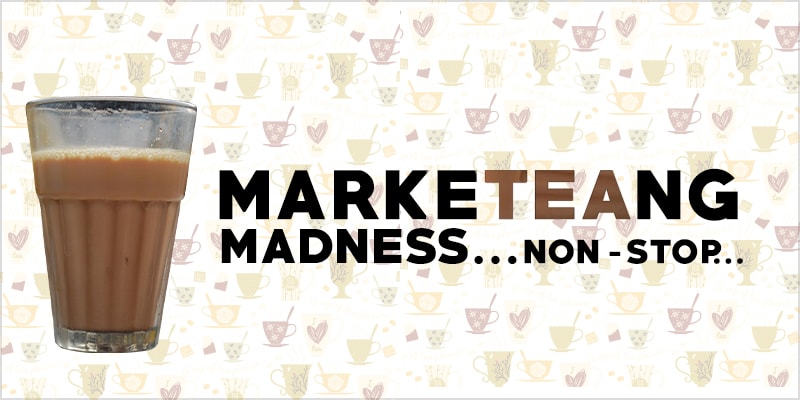 It is intriguing to think as to how learning works. Its everywhere for the eyes that seek and the feet that are never tired of walking. It’s incredible how something as commonplace as a neighbourhood tea joint can throw up an insight into marketing and advertising, nothing less of a ’Entry by Invitation Only’ seminar at a posh banquet far away from the systematic chaos that ensues at neighbourhood tea stalls.

Calcutta, or Kolkata as it’s re-renamed, is a weird place. More often than not, it is the absurd and the weird that break barriers. A cliché as it might sound, it is ’the square pegs in the round holes’ that make a difference. Sydney Smith was not kidding one bit when she mentioned it in her path breaking paper , ’ On the Conduct of Understanding’ , nor was Steve Jobs being a poseur when he included the idea in his (in)famous ’ Here’s to the crazy ones‘ speech.

Roadside Tea shops in Calcutta are a world of its own and are unique and different in their own right. A massive network that represents a individualistic characteristic, it is rather interesting as to how it can prove to be a master class in new age marketing strategies.

Be it any kind of a business in any vertical, it is the customer that decides the fate of a business. The way Calcutta tea stalls identify this aspect is liberating. Well, not all of them and therein lies a lesson. When you move past Gobinda Auddy Road, a quaint street nestled in Chetla, a residential neighbourhood in South Calcutta, you will come across Subir’s Tea stall on top of the street that intersects Chetla Palli. His brother, Gautam has a tea stall just beside Subir’s and you can imagine the kind of competition. The reason I chose these two shops for my first analogy is the simple fact that they are brothers, their respective tea stalls are roughly 10 metres apart, their shops look exactly similar to the other. Their tea tastes exactly the same (maybe a family recipe!) and most importantly they cater to the same potential customer pool. 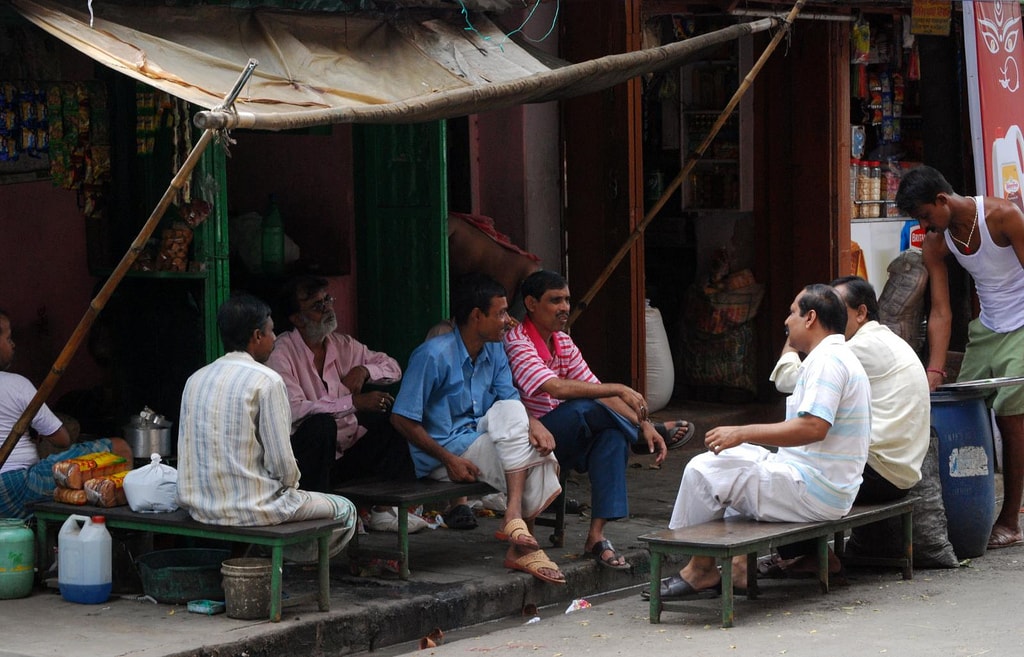 Subir is far more successful in his business than Gautam. He somehow strikes up a conversation and gets to know the name of every first timer at his stall and remembers it for a lifetime. In case he forgets, he quickly substitutes it with a generic identity that will suit the person well. Not only that, he is very adept at recognising the individual tastes and habits of his customers well. He knows how warm or hot each of his customers likes their tea to be. The kind of accompaniment they like with their tea; biscuits, cakes, cigarettes and the likes. Well to cut the story short, Subir is extremely anticipatory towards his customer’s persona. This equips him with the ability to know his customers well and surely enough he doesn’t have any problem upselling a lot of stuff – a feat that Amazon does extremely well unlike a Snapdeal or Flipkart. The conversion rate of customers turning into patrons is extremely high in case of Subir. Sounds familiar, right? Yes, it’s what the brands are paying a lot of attention through their Customer Loyalty programs

Lessons Learned: We, the digital marketers, have to switch on the conversational mode in us. We need to speak like a human does with our audience on social media. Let us (the brands) have emotions like everyone else. Small talks matter. A simple “How Are You today?” message will draw the audience closer. Remember, how Facebook greets you with good evening / good night messages as you login to the app? (Read: 9 Hacks For Digital Marketing Success)

The present business ecosystem has no room for complacency. It is downright competitive. Here is the deal. You might want to include various surrogate services and options for you to engage your customers beyond your core service. The biggest example of such a model and it’s boons is found at Bishoo’s tea stall outside the Bangur Government Hospital, in South Calcutta, is remarkably different. There are at least more than a dozen tea stalls around the hospital, but Bishoo’s one is the most easily recognisable. It is always teeming with people. Here is the deal, apart from serving tea, savouries, snacks, recharge coupons and a lot else, common to most tea stalls in the vicinity, he takes services a step further. He has about five or six helpers at any given time to help his customers with other services like bill payment at the hospital, electricity bill payment, passport and other identity cards processing, train and air ticket booking and the likes. A government hospital includes a lot of procedures that need serious queuing up and patience. Well you can hire one of Bishoo’s helpers for a nominal amount and chill at the tea shop sipping hot piping tea, while your errands are run by a bunch of extremely resourceful lads who know the procedures inside out. Just as I was sitting and observing this, Bishoo came up with a masterstroke. He got a confirmed ticket booked for a gentleman who had to take his injured relative to some other hospital outside town. It goes without saying that instead of waiting at the waiting room of the hospital, the gentleman would chill at his shop sipping on tea periodically, for as long as his relative was in the hospital. All of this from a roadside tea stall, not a full-fledged shop!

Lessons Learned: No matter what business we are in, expanding beyond the core business may find unexpected growth provided best practices are followed. This holds true especially for businesses trying to expand online. It’s important to note here that the key in service expansion lies in a) understanding the market context, b) finding growth close home, and c) building the right capabilities.

Engaging With Customers at a Personal Level

Be it Subir or Bishoo, for them the winning stroke has been the interest they have taken in knowing their customers and dealing with them personally. There are various types of customers that came to these shops at any given day. Like any good entrepreneurs, both Bishoo and Subir are ready to indulge in any kind of conversation on any topic to make each customer feel at ease. This lets them gauge customer pulse and hence approach each customer with a great deal of anticipation.

While planning digital marketing for small businesses, social media should be used extensively to play this part. Relevant Content creation and curation helps to engage deeply with the followers.. In order to increase our chances of conversion, it is necessary to keep generating content of various types that may not directly sell products / services, but wins your audience’s interest.

It Pays to Think Differently

Dilip’s tea stall in Southern Avenue is a popular joint among young professionals and old patrons alike. A couple of decades ago, during the Emergency, there was no milk available. All the tea shops in the region were only selling liquored tea. Sales were dwindling. What Dilip did was incredible. He bought two cans of condensed milk and realised that not only did the tea taste different from others but it cost him less. Needless to say, it was a huge hit, and his shop came to be known as the condensed milk tea shop. It has become so popular that the trend has caught on. To keep himself ahead of the race, Dilip continues to innovate by introducing artificial sweeteners for diabetic or health conscious customers. He also offers different types of brews to compete against a cafe and tea bar that has come up just across the street. Believe me, Dilip’s joint is open only for a couple of hours in a day, but it sees so many customers in a day that it has become a cultural icon, featuring in modern novels and stories alike.

At Nochi Da’s tea stall in Jadavpur 8B bus tand, you’ll find a particularly weird tea stall, which is always teeming with people old and young. A fan of the Bengali singer-songwriter, Nachiketa, his shop is decorated with a million different posters of the man. He himself looks and dresses like him, and not a single minute goes by without Nachiketa’s music playing in the background. Though his tea is not the best in the region, many queue up to hear him hum the tunes and drink tea, just a speck of novelty.

Lessons Learned: Innovation is not easy, agreed, But, it’s not too difficult to pump the business with different ideas – irrespective of their ingenuinities. Waiting for that lightning idea to bring forth the miracle is purely utopian. Getting inspired from others, and tweaking it for the business is certainly doable. The market is swiftly changing and only the ones looking far ahead in time sustain the long race.

It is important to identify or establish a truly relevant USP while marketing a brand. It takes layers of discussions, brainstorming to find that proposition which is truly believable. Once established, the brand persona must imbibe that well. We should make sure that every ad, social communication, PR news reflects that confidence unashamedly.

If you are looking for best online marketing strategies that are left of the centre and promise to brew a successful brand get in touch with us.